In this article we'll discuss how different types of manufacturing techniques could help the AEC Industry gain back productivity and efficiency. We also talk to Chris Aerts, CEO at APlusV solutions, about the current state of automation and venture capital in the industry. In this article, we will be discussing the "project management triangle" that often seems to play out in the AEC sector: to find a balance between schedule (time), budget (price) and scope (quality). In today’s projects, one needs to choose a set of two, but it seems impossible to deliver all three at the same time: fast and cheap won't be of good quality; cheap and of good quality won’t be quick or on time; on time and of good quality won't be cheap.

Prefabrication and modular construction is aiming to deliver the impossible, namely to satisfy all three variables at the same time. We will discuss the role of digitalization, and look at some best practice examples that aim to tackle the housing crisis by productizing the build environment.

As discussed in our two last articles about fragmentation in the AEC (Pt. 1 & Pt. 2), this industry suffers from low value creation and strong industry fragmentation. As of today, building as an industrial activity is still project-based (within and across projects), heavily relying on “on-site” work right at the construction site.

More recently, however, new digital planning platforms and additive manufacturing technologies are promising to change AEC by streamlining the design-to-built workflows, cutting time and other forms of waste in construction. Are we actually witnessing the complete (digital) transformation of the AEC domain, or will it just fade away (again)? Let's find out.

As mentioned, the “on-site” approach makes sense for heavy, monolithic structures as for example in infrastructure usually made from cast reinforced concrete. Think of tunnels, bridges, streets and foundations. On the other hand, lightweight (hybrid) elements made from wood and steel can easily be prefabricated in a factory, an approach commonly termed going “off-site”. Using manufacturing environments combined with reusing designs are the key differences of Industrialized Construction when compared to traditional construction.

Building Information Modelling (BIM) lays the foundation for the efficient digital planning across trades. On top of it, thinking in building systems allows these components to become literal products: In Industrialized Construction, these solutions are reused from one project to another, avoiding unnecessary rework on the planning and permitting side while integrating parametric control for mass-customization. 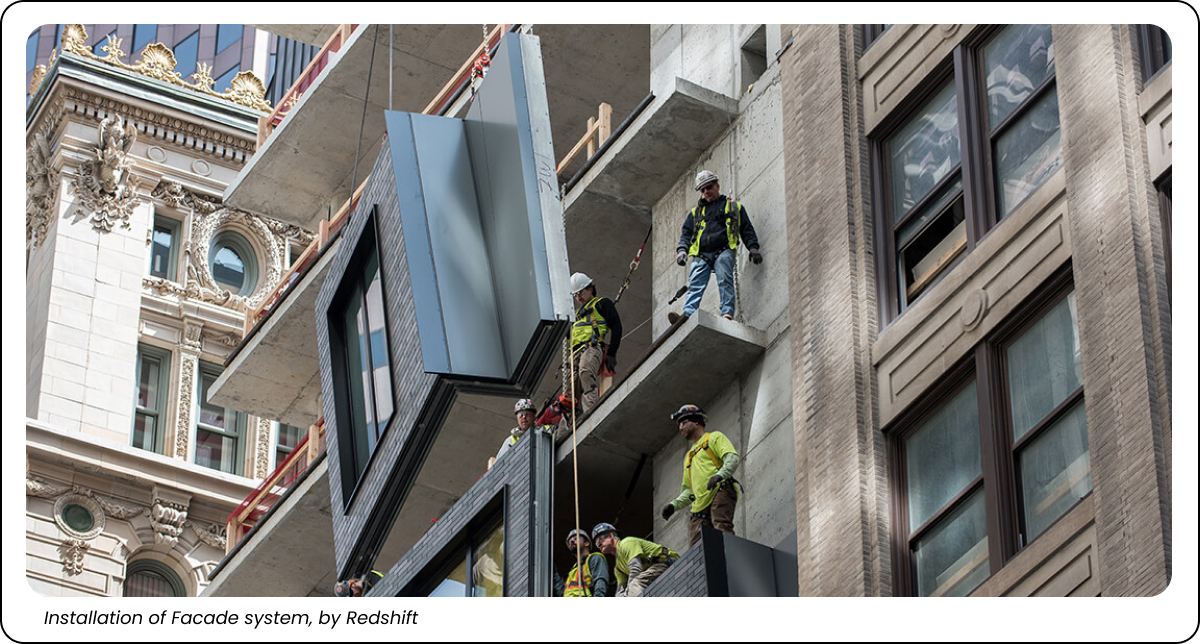 Off-site vs Prefab vs Modular

"Off-site Construction" is an umbrella term, under which prefabricated construction and modular construction fall. It involves planning, designing, fabrication and assembly at a location which is not the final site and tries to minimize the work needed to be done on the spot. Off-site construction promises to be less time consuming, more sustainable, safe and flexible. As the structures are manufactured in an controlled environment it is possible to monitor and maintain quality - which is challenging in traditional, on-site construction.

"Prefabricated Construction", or “prefab” for short, is part of offsite construction. In Prefab, elements are constructed and assembled in a manufacturing environment, such as a factory instead of a construction site. Of course, these structures must adhere to local building codes and components can widely range in dimensions and complexity.

In "Modular Construction", a building is constructed in box-like elements. First, after being prefabricated, these 2D or 3D modules are being transported and mounted together on-site using minimal efforts. Modules often include kitchen and bathroom units but there is no limit to their use but considerations in terms of relocation resources have to be made.

Chris Aerts, APlusV solutions's CEO, believes that, “we should try to replace concrete with timber, which actually stores CO2 instead of emitting it. I think Mass Timber is the future for AEC! Especially for multi-story buildings.” Here, multiple solid wood panels are nailed and/or glued together, providing strength and stability. Elements can be produced to design specification.

Off-site, prefabricated modules that have been planned with BIM and are fabricated in a factory environment do not necessarily entail that they are being manufactured like products in other industries. But, and because of the fully digital workflow, the information from planning and design can be used to directly fabricate elements without the need for traditional 2D plans and sections.

This is commonly achieved by the use of numerically controlled systems such as CNC-type machinery and/or robotic arms or a combination of them. It is also possible to have machines work alongside human workers, sharing or alternating the tasks and increasing productivity and safety. As we previously discussed, additive manufacturing and assembly are on the rise, given the industries’ low added value. Manufacturing technologies also allow for more consistent quality and higher throughput.

As Chris Aerts mentions: “With the advent of high-level digitization, automated manufacturing of building components is becoming increasingly more common”.

Not surprisingly, the initial costs for setting up the software engineering workflows and also the hardware (as in, literally a factory) comes with respective capital expenditures early on and constant, if not increasing, operational expenses along the way. “Several large construction companies in the Netherlands have been pouring millions into building new factories in the last two years.”, explains Chris Aerts, “That is why we are currently focusing on the configuration platform instead.”

In fact, there are several strategies for new and existing firms to counter these high expenditures, such as setting up a partnership or taking capital from outside the company itself. For nascent firms (Startups and Spin-offs), this might be in the form of Business Angel investment and Venture Capital. These early tickets can also help to overcome financial barriers related to hiring and scaling, but most importantly cover up the cost of facilities before revenue can be generated.

In a recent article, Warren Buffet is said to be betting on the modular construction company MiTek that has a focus on hotel rooms and apartment buildings. Probably the most prominent example is US-based company Katerra, famously becoming the most recent - if not the only - AEC Unicorn. “However, just having an investment can not guarantee the success of a company, as Katerra’s recent downfall has shown.”, Chris Aerts adds. Tech-giants by the likes of Google are also betting fairly big on modular construction. 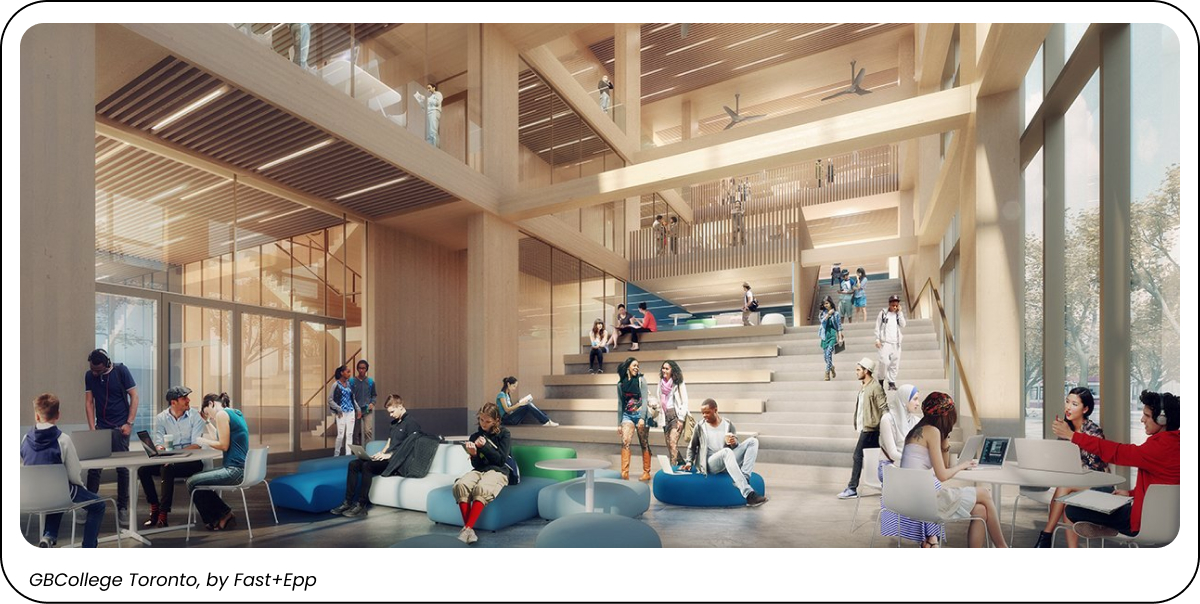 As business models are changing with the market dynamics, such as constantly changing trends, there is no one-size-fits-all model that can be applied in construction by everyone at any moment. Yet, we can mention some frequently found in AEC: General and/or Niche Construction Services, Production / Manufacturing, Material and goods supplier, “Brick-and-Mortar” type, eCommerce, Rentals, Contractor Services, Consulting / Engineering, and Commission-based business models (and a mix of all above), in B2B. 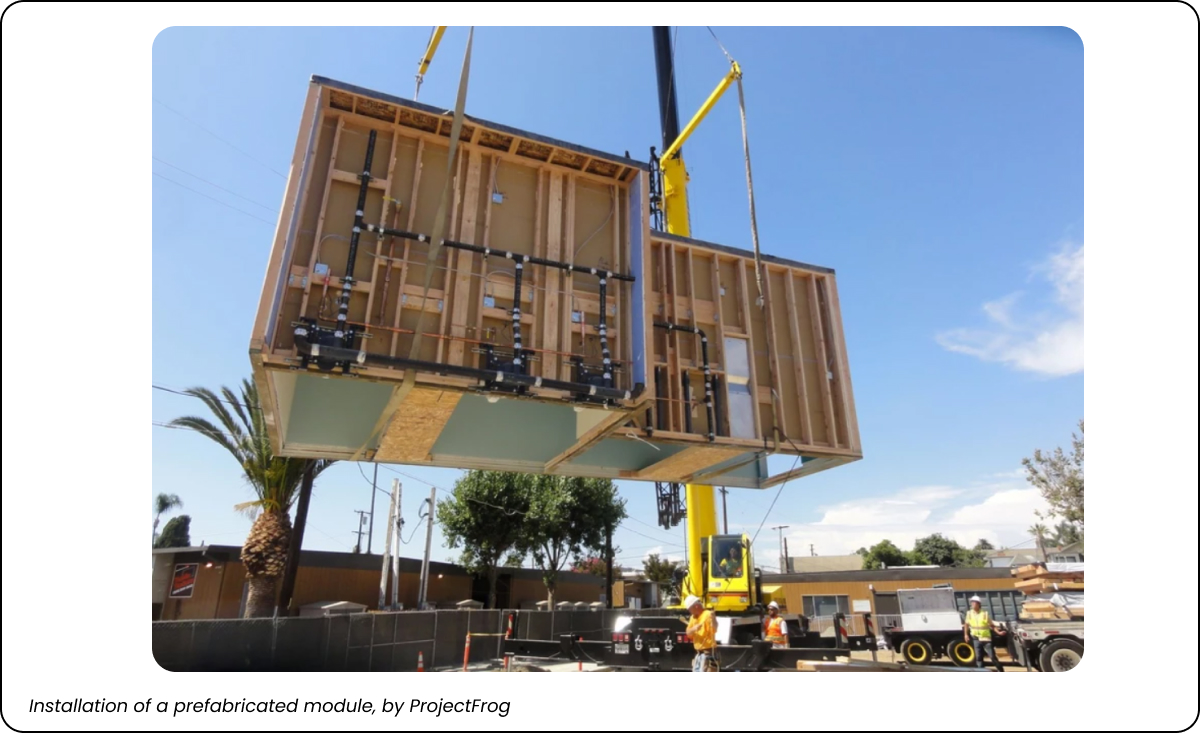 Some industrialized construction companies are offering a unique mix of those to create a unique value proposition and let the customer choose what they really want (B2C). For example:

This approach can also allow you to generate revenue by using the configurator (“pay as you go”). “Online configurators and parametric design platforms will change the way building products will be ordered and delivered,'' says Chris Aerts.

While modularization and prefabrication are not the answer to all productivity and efficiency problems in the AEC industry, they definitely show the path towards profitability under certain circumstances. Whether focusing on more efficient processes, or completely new business models, it's clear that improvements can be possible if all parties involved embrace a new way of approaching traditional problems.

<< Special thanks to Alex Walzer for his collaboration during the writing of this article. Alex investigates the role of entrepreneurship for and in AEC when utilizing nascent production technologies. He is a PhD researcher at the Chair of Innovative and Industrial Construction (Prof. Dr. Hall) at ETH Zürich - and can be reached at walzer.tech and @alexnikw on Twitter. >>

ShapeDiver is helping thousands of Grasshopper experts take their parametric powers online. With ShapeDiver you'll be able to create outstanding cloud-based applications based on your definitions.

Do you want to learn more about ShapeDiver? ESTIMATED READING TIME: 5 MIN.
5 Things You Didn't Know You Could Do With Grasshopper!
November 16th, 2021 by ShapeDiver